Let me share a bit about my own culinary journey. I was raised in West Africa’s tropical Côte d’Ivoire which used to be called The Ivory Coast and was a former French colony. I didn’t see much ivory when I was growing up, but I did work on my grandmother’s cocoa farm.

I left home in 1981 at the age of 22 and moved to New York to study literature at Manhattan’s Borough College with the goal of becoming a simultaneous translator at the United Nations. I could not have imagined that 10 years later I would be named Executive Chef at Spago — what was then, arguably, the trendiest, most famous restaurant in the US — working for Wolfgang Puck. But I am getting ahead of myself . . .

Living in New York fresh off the airplane from Côte d’Ivoire was a wonderful, intoxicating adventure for me — and an expensive one. I needed a job to make some money and found work cleaning New York City restaurants after closing; I’d come in at 3:00 am after a day of classes and studying to begin work mopping floors, emptying ashtrays, and wiping down tables and chairs. I jumped at the chance to work as a part-time prep cook at Alo Alo restaurant quickly moving up the culinary ladder to become a line cook under the tutelage of Chef Francesco Antonucci. In 1994, Chef Francesco asked me to join him at his new restaurant, Remi and I became highly trained in the art of pasta making, preparation of a superb risotto, gnocchi and raviolis.

It was at Remi where I first met Wolfgang Puck, the meticulous Austrian who would transform American cooking and become a celebrity in his own right — making cuisine approachable, fun and inventive and giving rise to a new generation of chefs. I was responsible for all of Puck’s prep work for his “Good Morning America” appearances. In 1989, I moved to Los Angeles and began work as a line cook for Puck. I worked at several of Puck’s restaurants including Chinois on Main and Postrio in San Francisco,  watching, tasting and above all learning. Within five months, I was named Sous Chef to Executive Chef Makoto Tanaka at Spago West Hollywood. There I paired my pasta-making technique with Puck’s one-of-a-kind sauces to create renowned dishes such as Seafood Risotto with Tarragon and Crisp Ginger, Sautéed Sweet Potato Gnocchi with Grilled Baby Chicken and Sage Parmesan Butter.

When Chef Makoto moved to Chinois on Main in 1991, I became the Executive Chef at Spago and remained in that position for nearly six years. During this time, I traveled to Japan with Chef Makoto to learn about Japanese cuisine and technique and trained with some of the finest French chefs including Chef Marc Meneau at L’Esperance in Saint-Pere-sous-Vezelay, Chef Bernard Loiseau at La Côte d’Or in Saulieu and at L’Oustau de Baumaniere in Les Baux-de-Provence and Troisgros in Roanne.

As Executive Chef of Spago, I was voted on the best upcoming young chefs in Los Angeles in 1992. Food critic Ruth Reichl of the Los Angeles Times, wrote,

“the early menu of Spago listed just four pastas: one ravioli, one angel hair and two that were simply called pasta. Today with François, we know exactly what sort of pasta we are going to ingest. Linguine, gnocchi, agnolotti, risotto, which was virtually unknown on menus in 1982, is now a fixture of California Cuisine.”

Not only was I learning to assemble flavors and to master various techniques — in short, to cook — I learned how to manage all aspects of a restaurant from finances to accommodating the requirements of celebrity patrons. In 1996, Wolfgang Puck chose me to open Spago Chicago, Puck’s first foray outside of California.

We were overwhelmed by the response. Legions of foodies lined up day and night to sample the new trend-setting eatery. We received overwhelming reviews in the Chicago Tribune, Chicago Sun-Times and Chicago Magazine. As Executive Chef and Partner, I oversaw the development of Wolfgang Puck Catering and Events, Puck’s Restaurant at the Museum of Contemporary Art and Wolfgang Puck Catering at The University of Chicago Gleacher Center, Goldman Sachs, Citadel Investments and many of Chicago’s premier event destinationsand cultural and commercial institutions.

In addition  to frequent appearances on television and radio, I have been featured in various print media including The New York Times, The Los Angeles Times, Chicago Tribune, Chicago Sun-Times, Chicago Magazine, Nations’ Restaurant News and Wine Spectator. I was the subject of a 2002 profile in Gourmet Magazine.

I contribute time and talent to working with youth and such charitable organizations as Meals on Wheels, The Ronald McDonald Foundation, Chicago Film Institute, The Rita Hayworth Alzheimer’s Association and The Milwaukee Ballet. 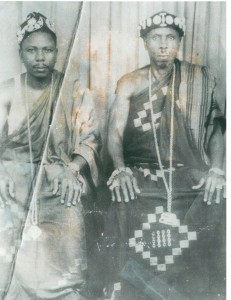 Chef Francois’s father (left) and grandfather (right), a Baoulé chief born in 1889, in the old Ivory Coast, circa 1945 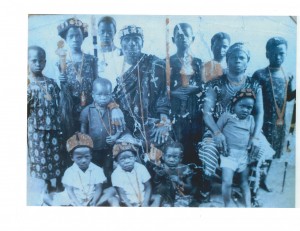 3 thoughts on “Bonjour, Mes Amis! Welcome to My Kitchen!”